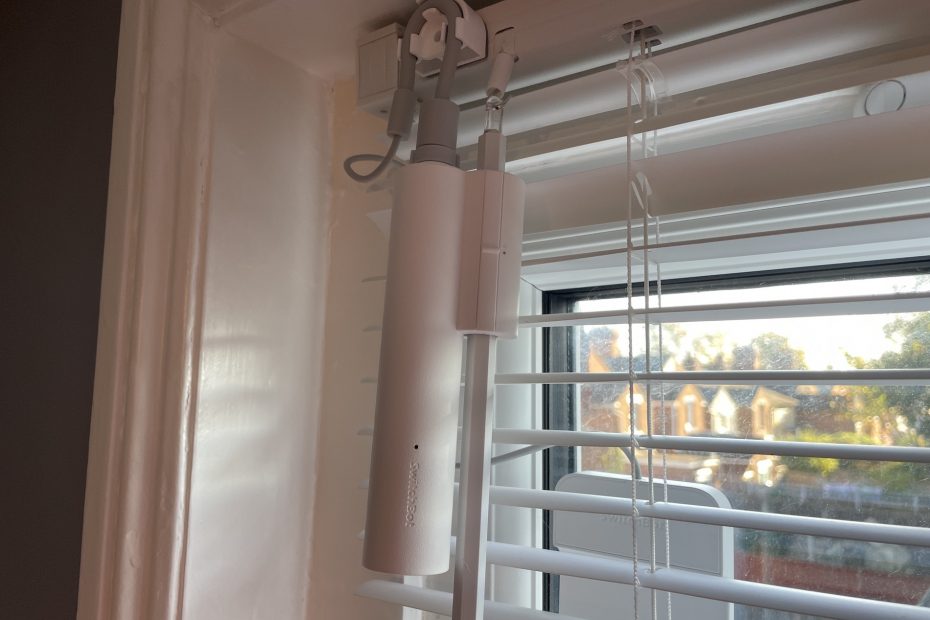 The campaign has just launched today and you can back it here.

What is the Switchbot Blind Tilt?

The Switchbot blind tilt is a motor-based device that attaches to your Venetian blind curtain rod which allows you to control it via you phone, using Amazon or Google’s voice assistants and setup automations based on light sensitivity, time of day or activity of other devices.

This is a great way of making your existing blinds smart and allows you to easily open them automatically in the morning for a gentle awakening, close them at sunset or even make it look like you’re still at home during your holidays.

This type of product isn’t new and we’ve previously reviewed the SOMA Tilt 2 which does a similar thing. Switchbot claim that theirs is the best on the market and [spoiler alert] we think they’re right! Keep an eye on the blog over the next few weeks or subscribe to us on YouTube for a blog and video comparison o the two products.

How much does the Switchbot Blind Tilt cost?

The Switchbot Blind Tilt is launching on Kickstarter today for $69 (which we think will translate to £69). This puts it at nearly half the price of the SOMA Tilt 2 however, as with the SOMA, to take advantage of out-of-home control and voice/cloud services you’ll also need to SwitchBot Hub Mini which costs £30.

We also think, that much like Switchbot’s other products, the more Blind Tilts you buy the cheaper they’ll be however, without seeing the Kickstarter, we are unsure of this at the time of writing. Switchbot have already started the manufacturing process which means you’ll receive your Blind Tilt by Christmas!

The Switchbot Blind Tilt is pretty simple when it comes to spec. It connects to your phone and the Hub Mini via Bluetooth…this has a really good range and can reach my Hub Mini which is a couple of rooms across and one level down in my house.

It has a battery inside that can last up to 10 months on one charge but also comes with a solar panel which you stick onto your window meaning that you’ll never need to charge it.

The Blind Tilt supports Apple and Android apps and works with IFTTT, Siri Shortcuts, Amazon Alexa and Google Assistant. There’s no Apple HomeKit support which is a shame.

In the box you get the Blind Tilt, a solar panel, a long USB-C cable for separate charging, a variety of accessories to use depending on the thickness of your blind rod, some instructions and some handy tools for measuring and setup. There’s also a stick-on clamp for the top of your blind for nice cable management.

The Blind Tilt is compatible with blind rods between 6.3 and 10.2mm or 12mm in diameter which covers most blinds!

The device has a variety of AI and sensors inside to detect light sensitivity and has a 37db quiet operating mode or 47db performance mode.

The Switchbot Blind tilt attaches to your existing curtain rod and so Switchbot have given it a rounded design which helps it blend in…especially if your blinds are white.

It has two cylindrical parts, a larger part containing the battery and motor plus the USB-C port at the top for attaching the solar panel or charging cable and then a smaller part which opens and attaches to your rod.

The solar panel is small and compact and, as it sticks to your window you don’t really see it anyway…but it looks nice!

How easy is it to setup the Switchbot Blind Tilt?

In the press pack Switchbot say you can set it up in less than a minute…you can’t!

We found it took 5-10 minutes to setup which included measuring the rod, finding the right attachment, fitting the tilt device and the solar panel and pairing it with the app and configuring it.

The included instructions are easy to follow and the app also talks you through the process. It’s a little fiddly at times but made easier by well written instructions. The measuring tool shows that Switchbot have really thought this through!

Calibration is the easiest process we’ve come across with smart blinds because you just twist the rod to open, closed up and closed down positions as per the app instructions…this is done in less than 30 seconds.

From this point you can setup any automations you want to.

There are four ways you can use the blind tilt and over the last month we’ve used all 4.

From the homescreen of the switchbot app you can easily trigger open and closed options…clicking into the device gives you a nice slider and more buttons for personalising your open/closed preferences e.g. you can create a 75% closed up button!

It’s also here that you setup automations, turn on cloud services and check that the solar panel is charging the device.

Automations for your blinds

There are several built-in automations you can use. You can use scenes to cluster devices together and operate based on the status of other Switchbot devices such as a remote or even if the temperature hits a certain level.

The most useful option is the option to open/close the blinds based on light levels. In using this we found that using the Blind Tilt as the measuring source was a little unreliable but that using the solar panel as the light source gave better results…this mode is still in beta testing so we expect it to improve over time.

The most common way we’ve used to control these smart blind tilt devices is using Amazon Alexa…a simple ‘Alexa, open office blinds’ works every time with only a small delay before the Switchbot Blind Tilt kicks into action.

They’re also compatible with Google Assistant but we haven’t tested that.

Finally, you can open your blinds with the rod

For those moments when you have guests round and don’t want to grant them access to your smart home or when you need to make a tiny adjustment you can still operate the blinds using the rod. The really clever thing here is that the Blind Tilt knows you’ve done this and still works when you send it a command in the future. This is super smart!

Our Verdict – Should you buy the Switchbot Blind Tilt?

We have been super-impressed with the Switchbot Blind Tilt in using it every day for a month. It looks good, works well every time and basically takes every frustration we have with the SOMA Tilt 2 devices which we’ve had for a year and fixes them! It’s so good that as it launches today on Kickstar we’ll be replacing the SOMA Tilt’s with them!

You get back the Switchbot Blind tilt on Kickstart here.