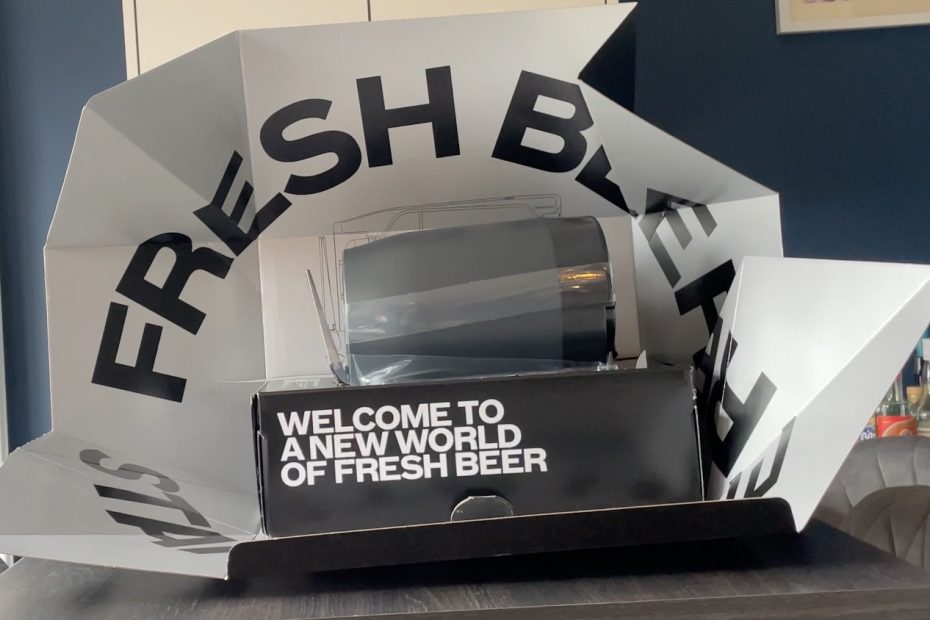 5 months ago we wrote a review of the Pinter 2, a way of making fresh beer at home with an average cost of under £2 per pint. It’s now the end of September and after months of issues for the company and product recalls we share our Pinter 2 – Review 5 months later. A good place to start before reading this is to check out our original review here.

Ready to purchase one? Save £10 with our link

What is the Pinter 2?

The Pinter 2 (or affectionally known as the Pinter 2.1 after the recall…more on that later) is a way of brewing your own fresh beer at home. The Pinter 2 consists of the main body and a brewing dock. Using the brew packs from Pinter you simply add water, yeast, syrup and sometimes a hopper…connect your Pinter 2 to the dock for the recommended amount of time, remove the dock and condition in the fridge for the recommended amount of time and then using the tap start pouring your own, fresh beer or cider.

What issues has the Pinter 2 had?

Within a couple of weeks of us publishing our original review there began to be mutterings in the Pinter Facebook group of a few people’s Pinter’s blowing their tops due to excessive pressure. Pinter responded to this by telling people to brew on 0 carbonation whilst they investigated and issued some safety advice. During this time of brewing on 0 carbonation they said they’d investigate and provide an update within a couple of weeks.

The problem with brewing on 0 is that zero carbonation means flat beer…which no-one likes…personally, I risked it and brewed on 1 rather than the recommended setting and luckily didn’t have any issues.

Fast forward 2 weeks and the Pinter explanation after their investigations concluded that this ‘exploding Pinter’ issue was due to the way the plastic inner-shell was attached to the body in the manufacturing process and impacted just 0.4% of all Pinter 2 devices.

Pinter owners were invited to complete an online form and were given a return date ranging from 1-2 months time. This meant 2 more months of flat beer or risky brewing (I went for the latter). Originally Pinter were going to fix everyone’s Pinter 2’s but as time went on this became a replacement, asking users to keep their taps, docks and hopper caps and just return the core Pinter.

For me, the return process was smooth…I received my return sticker on the afternoon of the day promised, packed it up, dropped it at the DPD parcel shop and within 2 hours had the code to redeem for my new core Pinter 2 (Pinter 2.1). Less than 2 days after returning my core Pinter it was delivered and I could brew again!

Are there any issues with the Pinter 2.1?

As more and more people in the Facebook community received their new core Pinters people began to notice that the ‘fix’ had reduced the pressure the Pinter could get up to significantly…Pinter then issued an updated brewing table which changed the carbonation dials…e.g. if a beer was previously brewed on setting 2 it was now setting 4.

Members of community found that their beer, even on the new settings, lacked the carbonation they were expecting and were only able to get a couple of pints out of their tap on the 45 degree pour position.

For me, I’ve brewed 4 beers since having my replacement Pinter, a cider, a Stars and Stripes, a Tropical Debate and a Livin’ La Vida Coca and I’ve had 1 issue with the tap…and that wasn’t Pinter’s fault, it was me catching the coil when putting it back together after cleaning…seriously…the Pinter tap reassembly is a faff and requires a lot of attention to get it right.

What I have found, is that the pressure is certainly less and I’m needing to get to the 90 degree pour position after about 5 pints rather than the 7 or 8 with the original Pinter 2 but this also means less glasses of froth.

Have Pinter acknowledged the tap issues with the Pinter 2.1?

With plenty of complaints about low pressure and pouring issues Pinter did a Zoom AMA with their CEO who pretty much admitted that the lower pressure of the updated Pinter 2 was causing issues with the tap and said Pinter were working on a new tap (in the month since that AMA there’s been no update on the new tap).

What is the problem with Pinter?

The problem with Pinter is (in my opinion) less about the product (which has still made me some really good beer…more on that next) but more with the company’s communication. There’s a theory that you can be reactive or responsive. A responsive company thinks carefully about their moves, acts with strategy, learns from their mistakes and listens to people whereas a reactive company is constantly fighting fires often with little thought.

Pinter have been (and understandably) in reactive mode the last few months. To their credit, they responded quickly to the issues and quickly issued replacements however, perhaps too quickly and without properly investigation and testing meaning that they’re now having to be reactive again when it comes to the tap issues. (At one point they sent out a reactive email telling people with tap issues to open the carbonation dial before pouring…advice which went against their own advice, ages beer quickly and also breaks their own promise of beer that can stay fresh for 30 days)

If I was sending a message to Pinter I’d be inviting them to seriously listen to their community, to be open, honest and completely transparent about the issues (rather than trying to explain them away) because I think what they’re doing is actually really good…which leads onto…

I’ve brewed 4 beers in my new Pinter 2.1 and had brewed 2 in my previous core Pinter 2 and as a whole I’m really happy with it. The beer tastes great, there’s a great variety of beers and cider available and the only tap issue I’ve had was with my own reassembly…an issue which, if they do release an updated tap, will no longer be an issue.

But should you buy one?

The Pinter 2 is marketed as a simple way to brew your own fresh beer and in my original review I agreed however, after 5 months I don’t think it’s a simple way…it is however, one of the easiest ways to do it but it is something that takes a bit more time and care than originally marketed.

That means…5 months on I would still recommend the Pinter but would advise you to be prepared to persist and experiment knowing that (hopefully!) at the end you’ll have a nice beer to sit down and enjoy.

You can save £10 on a Pinter by using our link.